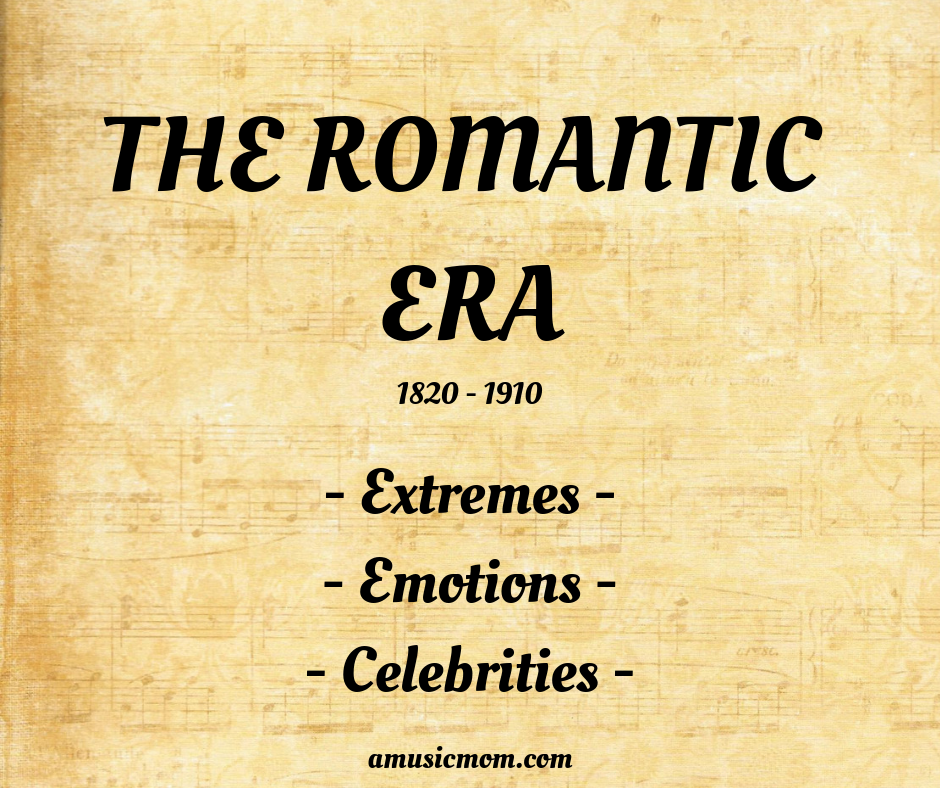 The Romantic Era of music lasted from about 1820 – 1910. The French Revolution happened during this time. Also, events in Europe were leading up to World War I. The music responded to individualism and nationalism at the same time. The Romantic Era magnified and multiplied all the ideas of the Classical Era.

Emotions are important in Romantic Era music. The music was all about feelings. Composers used extreme dynamics to show passion and intense emotion in the music. They also used energetic rhythms to show emotion. Music of the Classical Era was about balance and restraint. The music of the Romantic Era was quite the opposite. Think extreme and explosive!

The Romantic Era – Expect the Unexpected

Composers tried to test the new limits of better instruments. Romantic Era music explored new sounds of the instruments and the orchestras. Composers also played around with chords and chord progressions. Sometimes it was hard to figure out what key the music was written in. Another unexpected new idea was rubato. Rubato means changing the tempo (speed) within the piece of music, even in small sections of the music.

The Romantic Era – Celebrities and Virtuosos

Composers became more important during the Romantic Era. They were often treated like great celebrities. This was something new and different for the music world. Major status change – composers saw themselves as great artists! The instrumental soloist became a huge star as well. Soloists were very important in the new music. Their purpose was to dazzle and thrill the audiences with their impressive technical skill.

The Romantic Era – Individualism and Nationalism

Individual expression was important. Composers didn’t pay as much attention to what the people wanted to hear. They were more interested in the feelings they were trying to make with their music. Musicians also wanted to express their feelings about their home country in their music. They wrote music about the rivers, the landscapes, and the people. This was music to paint a picture of how they felt about their homeland.

The Romantic Era – Bigger is Better, More of Everything

Romantic music was like the music of the Classical Era, but way more. Symphonies that used to take about 30 minutes now lasted an hour or more. The dynamics were more extreme. Loud wasn’t good enough anymore – the music had to be super loud. Something soft had to be very soft.

The orchestras of the Classical Era weren’t enough for this new music – they had to get larger. They added more of the instruments they already had, then they added new instruments (like saxophones)! In many orchestras the percussion section exploded in size – the more, the better. The music was harder to play. The music became too hard for amateurs. Better musicians were needed. And as the musicians got better, the music got faster!

The Romantic Era – So Many Composers!!!

The Romantic Era – Examples of the Music

Music to Paint a Picture