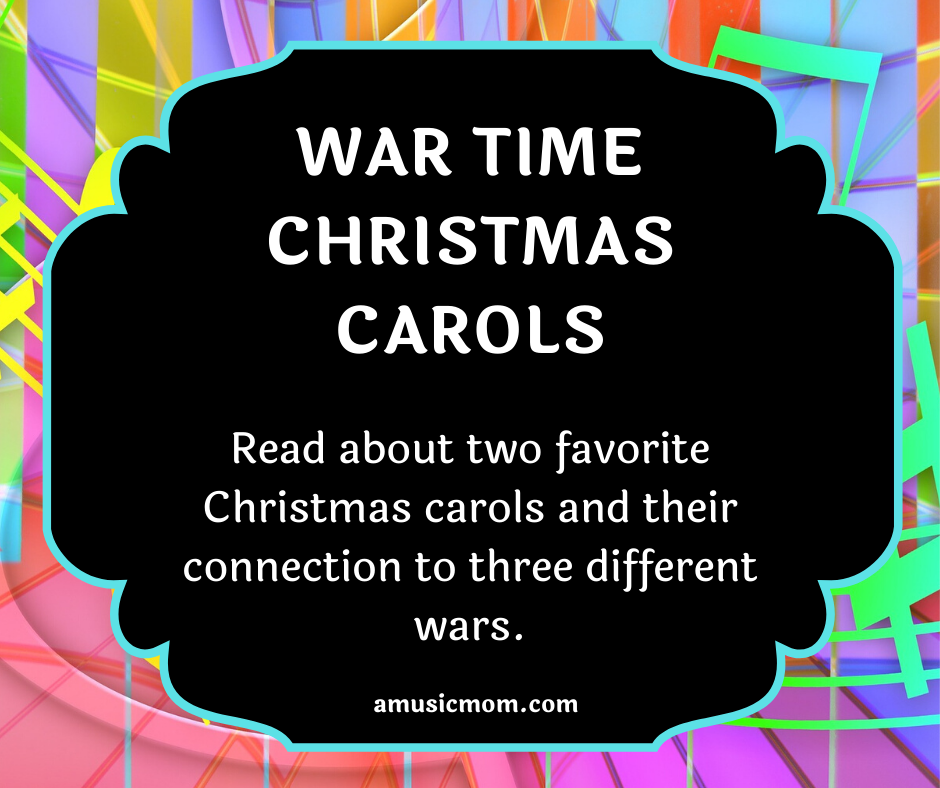 Wartime Christmas carols seem like an oxymoron. Peace on earth, goodwill toward men…and war? Doesn’t make sense, does it? Did you know that two of our favorite Christmas carols are associated with three different wars? Please keep reading to find out these two carols and how they are related to war.

How does a Russian-born, Jewish immigrant, with no musical training, manage to write the best-selling Christmas song of all time?

What does this Christmas carol have to do with the end of the Vietnam War?

What makes a great song?

Have you ever heard of Israel Baline?

Israel Baline, originally from western Siberia, emigrated to the US with his Jewish family when he was quite young.  Jobs were hard to find; everyone in the family needed to work to earn money to survive. Young Israel (Izzy) tried to earn some extra money by singing new songs in taverns, vaudeville theaters, and even on street corners. Yes, Israel had a good ear for music and could sing well, but he had no real musical training. He taught himself some basics of playing the piano but never learned to write music. He did learn what made a good song and what his audiences liked to hear in a song. That may have been the most important thing he learned about music.

But who is this Israel Baline? Why have you never heard of him? Blame it on the publisher of his first song. When Israel’s first song was published, the printer made a mistake. Instead of printing I. Baline on the music, the composer was listed as I. Berlin – Irving Berlin. Have you heard of him? I think so – In addition to “White Christmas,” he also wrote “There’s No Business Like Show Business,” “Alexander’s Ragtime Band,” and “God Bless America.”

In 1940 Irving Berlin agreed to write the musical “Holiday Inn” for Paramount Films. “White Christmas” was one of many songs Berlin wrote for the musical. But he never thought that song would be the favorite song of the show. “White Christmas” contains all the characteristics of a great song. The melody is easy to sing, easy to remember. The lyrics have meaning. The song was relevant to the listeners, expressed a certain mood, resonated with the audience – but all for a reason different from what Berlin intended. That’s where timing comes in.

December 7, 1941 – An important date in US history – the bombing of Pearl Harbor. Soon America was at war. Americans were signing up for the armed forces and heading off to war. December 24, 1941 – just a few weeks later, Bing Crosby sang “White Christmas” on his well-known radio show. Although originally written as satire, when Crosby san “White Christmas,” his audience took an entirely different meaning from the song. To the listeners, the song expressed a sense of nostalgia, a yearning for home, a longing for the way things used to be.

Listen to the original version, sung by Bing Crosby.

What does “White Christmas” have to do with the end of the Vietnam War? In March and April of 1975, the US military prepared for the final evacuations of embassy personnel from Saigon. The evacuation instructions contained the text of a secret code that would be broadcast to notify personnel of the evacuation timing. The code broadcast over Armed Forces Radio read like this: “The temperature in Saigon is 105 degrees and rising.” The playing of “White Christmas followed this announcement.” Several non-US personnel had others sing the song for them in advance of the announcement to be sure they would recognize the song when it was played.

“White Christmas,” originally written as a satire in a musical, went on to become one of America’s most-loved Christmas songs. Although it was written by a Jewish Russian immigrant with no musical training, the song causes us to reflect on Christmases past, and remember family and friends when we are separated from them. And snow – don’t forget the beautiful snow! At least at Christmas we can fondly remember snow.

The sun is shining, the grass is green
The orange and palm trees sway
There’s never been such a day
In Beverly Hills, L.A
But it’s December the twenty-fourth
And I am longing to be up North  [Not all versions contain these lyrics]

I Heard the Bells on Christmas Day

Did you know that one of America’s famous poets wrote a Christmas carol?

Or was it an anti-war protest piece?

Or was it just a longing for peace after several personal tragedies?

One of America’s Famous Poets

The poet who wrote “Paul Revere’s Ride,” “The Song of Hiawatha,” “The Wreck of the Hesperus,” “Evangeline,” and “The Cross of Snow” also wrote a poem entitled “Christmas Bells.” This famous American poet – Henry Wadsworth Longfellow. Longfellow lived during the 1800s and suffered several personal tragedies. His first wife died after they had been married for only six months. After several years Longfellow remarried and had 18 wonderful years with his wife, Fanny. A tragic fire in their home in 1861 cost Fanny her life. Longfellow himself was so injured in the fire that he was unable to attend his wife’s funeral. His poem “The Cross of Snow” was written to commemorate her life – 18 years after her death.

Longfellow fell into a depressed state after Fanny’s death. Christmas was especially difficult for him. His journal entries reflected his thoughts. In 1862 he wrote the following: “A merry Christmas’ say the children, but that is no more for me.” A year after Fanny’s death, his journal reflected, “I can make no record of these days. Better leave them wrapped in silence. Perhaps someday, God will give me peace.” He also wrote, “How inexpressibly sad are all holidays.”

In 1863 Longfellow’s son Charley joined the Massachusetts Artillery and fought in the Civil War. By November of that same year, Charley was severely injured, and Longfellow brought him home to begin the long process of healing. That Christmas (1863), Longfellow wrote the poem “Christmas Bells,” which later became the carol “I Heard the Bells on Christmas Day.” Longfellow had a difficult time listening to the Christmas bells chiming about peace on earth and goodwill among men while at the same time dealing with his own despair, tragedy, and his nation being at war with itself. Where is peace? He looked around and saw hate, despair, all mocking the idea of peace. But as the bells continued to ring, he was reminded that God is not dead or asleep and that there was still hope for personal and national peace. The poem he wrote included two or three verses directly referencing the Civil War. When the poem was set to music several years later, those verses were omitted from the carol.

What about the Melody?

Speaking of the music…Sometime in the 1870s, a melody written by John Baptiste Calkin was paired with Longfellow’s poem to give us the carol we know as “I Heard the Bells on Christmas Day.” This is probably the most familiar version of the carol. In the 1950s, Johnny Marks (famous for “Rudolph the Red-Nosed Reindeer”) wrote another melody for the same carol. You have probably heard them both. Here are links to both of them:

Which one do you prefer?

I Heard the Bells on Christmas Day

I heard the bells on Christmas day
Their old familiar carols play,
And wild and sweet the words repeat
Of peace of earth, good will to men.

I thought how, as the day had come,
The belfries of all Christendom
Had rolled along th’unbroken song
Of peace on earth, good will to men.

Then from each black, accursed mouth
The cannon thundered in the South,
And with the sound the carols drowned
Of peace on earth, good-will to men! *(Stanza directly relating to Civil War – omitted in the Christmas Carol)

It was as if an earthquake rent
The hearth-stones of a continent,
And made forlorn the households born
Of peace on earth, good-will to men! *(Stanza directly relating to Civil War – omitted in the Christmas Carol)

Then pealed the bells more loud and deep:
“God is not dead, nor doth He sleep;
The wrong shall fail, the right prevail,
With peace on earth, good will to men.”

Till, ringing, singing on its way,
The world revolved from night to day
A voice, a chime, a chant sublime,
Of peace on earth, good will to men.

Two wartime Christmas carols. One reminding us of memories and home, the other offering hope in the midst of despair. Both familiar parts of our Christmas celebrations. Which is your favorite?

Interested in more of the stories behind Christmas carols? Check these other posts :

The Stories behind the Christmas Carols

Christmas Carols – The Stories You May not Know