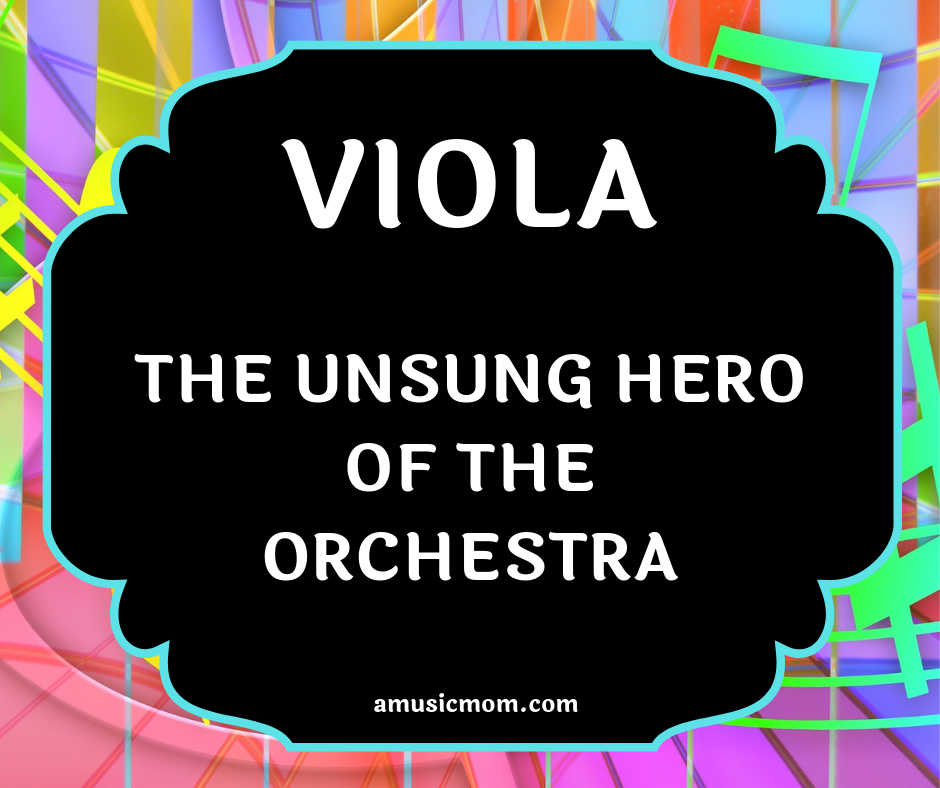 Have you ever heard of a viola? Do you play viola? Are you tired of always having to explain to people what a viola is, and how it is not just a larger violin? Let’s take a look at the this instrument today – the unsung hero of the orchestra.

The viola was developed about the same time as the violin – in the first half of the 1500s, in northern Italy.

Once upon a time (in the 16th and 17th centuries) the viola section consisted of three different kinds of violas. They were different sizes, had different ranges, and played different parts – alto, higher tenor, and lower tenor. By 1750 the lower tenor viola morphed into the cello of today. The higher tenor disappeared from the scene, and the alto tenor became the viola in use today.

Violas use the same four strings that the cellos use – C, G, D, A. But no, you cannot just put cello strings on a viola.

Unlike violins and cellos, there is no standard size for a full-size viola. Full-size violas can be anywhere from 14 to 17 inches long. Choosing the right size is a matter of the size, strength, and preference of each individual violist.

What does a viola sound like? How would you describe its sound? People have described the sound as being mellow, rich, dark, intense, melancholy, and chocolatey. And who doesn’t like chocolate! Does that make violas the favorite candy of the orchestra world?

The poor viola was never as popular as the violin. Part of the reason for that was that there wasn’t much music written for solo viola. Nobody knew how great the instrument could sound on its own! The first known viola sonatas were written in England in 1770 by William Flackton. He thought it was a shame that very little solo music was written for the great sound of the viola, so he wrote some himself.

Two other people who helped to focus the spotlight on the this instrument were Lionel Tertis and William Primrose. Lionel Tertis (1876-1075), known as the “father of viola playing”, was one of the first internationally famous violists. He performed as a soloist and a chamber musician, and he also taught viola. He wrote and arranged several pieces for the instrument. In 1980 the Lionel Tertis International Viola Competition was formed in his honor.

William Primrose lived from 1904 to 1982. He started as a violin soloist, but later switched over to viola. He has been called a 20th century virtuoso. (That means he was really good!) He also devoted time to teaching and writing viola technique books. The Primrose International Viola Competition began in 1979 – the first international music competition for viola.

What’s the Difference between a Viola and a Violin?

In many ways the two instruments are quite similar. But there are some important differences you should know.

The viola does not usually get the lead role in an orchestra, a string quartet, or any chamber music group. Its main role is as a supporting sound. The viola part may never stand out, but if it were missing, everyone would know! Usually the instrument plays counter-melodies or harmonies. If you are familiar with choir voices, the viola part would be comparable to the alto part. Not usually the melody, but still very important.

Violists are a Step Above

Violists are a special group of people. They are unique! Many people claim that it takes more skill to play viola well than violin. Why would that be?

Violas are larger, so the fingers must spread out more on the fingerboard when playing. This requires greater technical skill.

Viola strings are thicker than violin strings. In order to get a great sound, the violist must use more bow speed and more weight on the bow.

Not only that, viola players must know how to read alto clef! (Superior intelligence required?) How many violinists do you know who can read both treble clef and alto clef?

There are far fewer violists than there are violinists. Viola players rule! Your importance is underrated. Great demand for great viola players!

Violas are not just super-sized violins. They are unique instruments that have a special sound and play an important role in any orchestra or chamber group. No other instrument has a sound compared to chocolate! Love your viola and love your violist!

If you want to read more about violas, check out these links.

And if you want to read about some other instruments, you can read about Flutes, Violins, Trumpets, and Marimba.