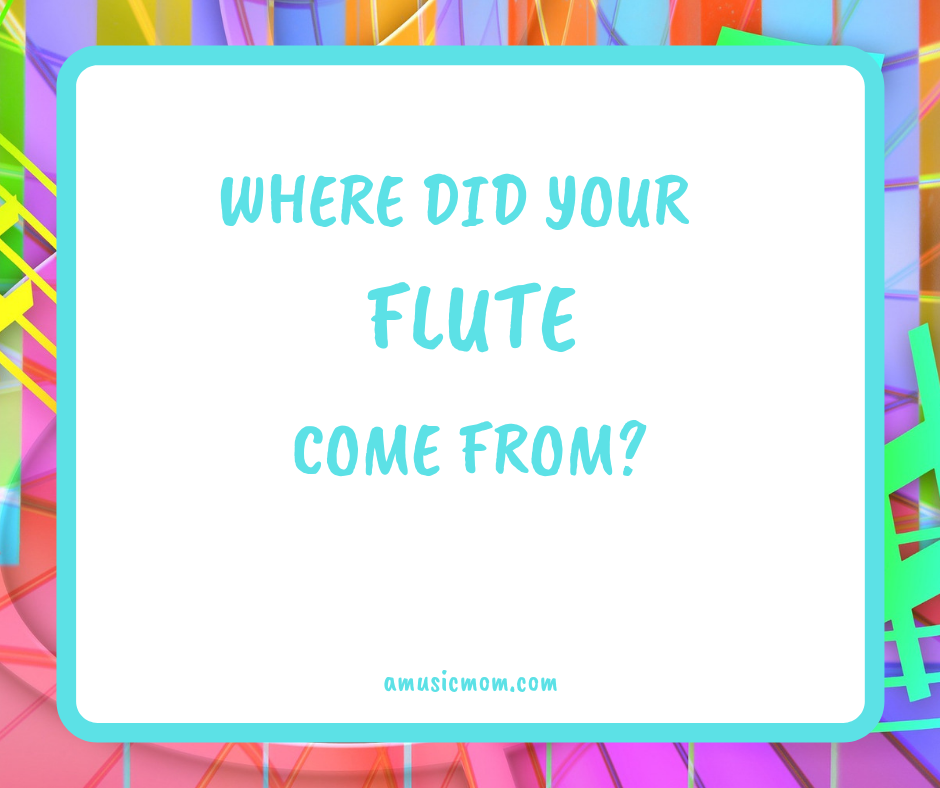 Are you a flute player? (I am!) Do you know anything about the flute’s history? Where it came from? The flute certainly didn’t start out looking like it does today! Let’s explore a little bit about where your instrument came from – the history of the flute.

There are a few names that stand out in the history of the flute. Here are four of these important names:

Ever heard of any of them? If you keep studying you will probably play some music written by Johann Quantz (1697–1773) . He was a flute player, a flute maker, and a flute composer. Quantz also wrote some important ideas about playing the instrument and using different fingerings for making the flutes of his time sound better. He even gave flute lessons to Frederick the Great of Prussia!

You also need to know the name of Theobald Boehm. Your flute is patterned after his design ideas. You can be very thankful for Boehm’s brilliant ideas about making this instrument easier to finger, easier to keep in tune, and easier to play.

What should you call a person who plays the flute? Flute player, flutist, flautist, flutenist – they all work. Although I have never heard anyone use the term flutenist before.

The flute is the oldest kind of wind instrument. Historians say a form of flute easily dates back 40,000 years. But I’m not sure we would enjoy playing the flutes from that era!

There are twelve instruments in the flute family. The most common ones are the flute and the piccolo. The lowest and most massive member of the family is the hyperbass flute. It sounds four octaves lower than a regular flute. Its lowest note is a C that is one octave lower than the lowest C on a piano! And the hyperbass flute is over 8 meters long – that’s over 25 feet long!

Now for some history:

The flute is the oldest wind instrument that historians have found evidence for. Originally the word flute referred to instruments that were either blown from the end (like a recorder) or blown across (like today’s flutes). The first evidence for blown-across flutes, or side-blown flutes, comes from the 1st to 4th centuries B. C. Blown-across is a bit awkward to say, so these flutes became known as transverse flutes.

By the Middle Ages these early flutes were often made of wood, were made with just one piece, and had 6 finger holes. Traveling minstrels carried and used them throughout Europe. By the 1500s groups of players with different-sized flutes often played together in ensembles called consorts.

But there were problems with these flutes. Most of the flutes were made to play in the key of D major. The main problem these flutes had? Intonation! They did not play in tune very well. Not in tune with themselves, and not in tune with others. And there wasn’t really any way to fix the problem.

By the 1600s people were trying to find ways to solve the problems. One of the first changes was to separate the instrument into three different pieces – like your instrument today. They made a head joint, a body piece, and a foot joint. That may not have solved any sound or intonation problems, but it made it easier to pack and carry the instrument!

The flute made its first appearance in an opera orchestra in the 1600s. That was a big deal because it showed that composers were willing to write parts for the flute. The flute was competing with the recorder for acceptance and importance. The main problems for the flute were intonation (still!) and consistent sound. Do you ever hear those things talked about by your teacher? I think the problems were much worse back then.

Another solution people tried was to make interchangeable body parts. So, if your flute was built in the key of D, and the music was in the key of F, you would exchange the body part of your instrument for a shorter one, in order to get a higher sound. Interesting idea. But people didn’t think this through well enough. No one adjusted the key holes on the longer or shorter parts for more accurate sounds. Intonation was still a problem.

Along came some key people trying to make improvements. The Jean Hotteterre family, Pierre Gabriel Buffardin, Johann Quantz, Johann Tromlitz, and Theobald Boehm. Many of these were accomplished flutists themselves, and understood the problems with their instruments. They were looking to solve the problems.

Jean Hotteterre and his family were the ones responsible for redesigning the flute from 1 piece to three. They also made the tone holes of the instrument smaller and added a key for E♭(D♯).

Johann Quantz adjusted the shape and size of the tone holes and introduced a tuning slide. He wrote a long explanation about playing and teaching the flute, “An Essay on Instruction in the Art of Playing the Transverse Flute.” Doesn’t that sound impressive? He also wrote about 400 pieces of music for the flute. That did a lot to boost the instrument’s popularity.

One Step Forward, Another Step Back

By this time the flute was pretty well established as a part of the orchestra but was losing on the solo scene. There were still intonation problems. And the sound of the instrument was not powerful enough for the larger concert halls in use. More work needed for the flute.

The Beginning of the End (of the Problems)

Finally, by the 1830s we get to the beginning of the end of the flute problems. Theobald Boehm, a flute player and a flute maker, started to study all the problems of the instrument and all the things people had done to try and solve the problems. He started to collect and implement the ideas of others. He added ring keys to the instrument – idea of Frederick Nolan. And he studied the idea of larger tone holes for a more powerful sound and added that to his flutes. (Idea compliments of Tromlitz.)

In 1847 he presented a new instrument to the world. The New and Improved Boehm Flute. This instrument had cylindrical tubing, an evolutionary new design for the head joint, improved key mechanisms.  He used pin springs (idea of Louis-Auguste Buffet), felt pads for the key cups to prevent air from escaping, changed the shape of the embouchure hole, and added a slightly raised lip plate to make the instrument easier to play. All these ideas are still part of your instrument today. In fact, very little has been changed on the flute since Boehm introduced his new design.

How was this instrument received? How well did people like it? Most people were quite enthusiastic about this new flute. But, of course, not all. Boehm’s new flute required players to learn new fingerings. There were some people who just didn’t want to do that. (Stubborn?) After 20 years or so, Boehm’s new design was the standard in the flute world.

From D to C

At some point in the redesign process, flutes were built to play in the key of C. That means that when you play a C, it matches the C on a piano. Flutes have a range of three octaves – from middle C up to the C above the 5th leger line above the treble staff. If you get really, really good, you can get a couple notes higher than that. And some flutes are made so you can get a note below middle C. But most music does not require those notes.

Now you know a little bit more about your flute. Be thankful for all the design modifications! You have a wonderful instrument. Where are you in your flute-playing life? Book 1? Advanced? I would love to hear your flute stories! Tell me one of your stories, and I will tell you one of mine. Leave your story in the comments!

If you are interested in more about the history of the flute you can read more information here: