Our music theory focus today is on rhythm. What is rhythm? Rhythm is a very important part of the structure of music, or how music is organized. It gives us patterns of sounds and silences in our music. Rhythm notation provides the tools to put the organization of sounds and silences on paper. We talked about some basics of rhythm notation last week. If you missed it you can check out that post here: https://amusicmom.com/music-notation-basics/

Remember, measures divide our music into smaller segments. Each measure can only hold a specified amount of music. The time signature determines how much music one measure can hold. Let’s compare that to baking. If you make cookies the recipe doesn’t just tell you to put in flour and sugar. It tells you how much flour and sugar to use. The recipe tells you to measure out a certain amount of the flour or sugar to make your cookies turn out just right. Our time signature does the same thing for our measures of music.

We have many ways to write 4 quarter notes’ worth of music. We can use one whole note, or two half notes, a combination of two quarter notes and one half note. If we want to make or rhythm more complex we can add eighth notes and sixteenth notes to our combinations. And if we don’t want sound on every beat we can use rests to substitute for sounds. We can write an entire measure of rests or we can write some notes and some rests. We can use any combination of notes and rests we like, as long as their total values don’t exceed the amount allowed in the measure.

Look at the following graphics. These will help you remember note values and their comparable rest values. 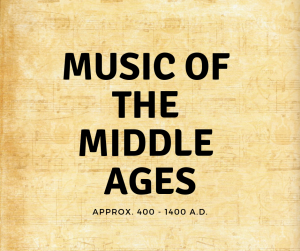 Changes in the Sound of the Music of the Middle Ages

Middle Ages music started as monophonic music – music that was sung in unison. There were no chords, no harmony, no instruments playing with the singers. The only sound was the melody – everyone in the choir sang the same notes. And all the music was memorized – no written music, remember? Because almost all the music was sung in the church, and because it took so long to learn all the music, the church decided to start a singing school for younger boys. That way by the time the boys grew up they would know the music and could continue in the choir. Only problem – boys can’t sing as low as most grown men. So, the choir director had the boys sing the same note as the men, but an octave higher. Now you had two lines of music – still both lines were singing melody, but one line sang higher and the other sounded lower. Here is a link to what monophonic Gregorian Chant sounded like: https://www.youtube.com/watch?v=kK5AohCMX0U

And this gives us polyphony – music with more than one vocal line. Over time someone got adventurous and wondered what would happen if he changed some of the notes. What if the lower voices continued to sing their part, but the higher voices sang just four or five notes higher than the melody line? They tried it, and evidently, they liked what they heard. They called this sound “organum” because they thought it sounded like the organ. (Remember – the ancient Greeks and Romans had organs.) And then they added another part – a drone sound lower than the melody. A drone sound is just the same note sounding throughout the entire piece. It was terribly boring to sing the drone part! Eventually the choir director had an instrument (like the organ or the psaltery) play the drone part. Here is an example of early organum music: https://www.youtube.com/watch?v=SgHzH5iDcGQ

By the 1100’s music got another big change. A musician/composer named Pérotin started writing song with 3 or 4 musical lines. He wrote music with chords and three or four part harmonies. No one had done that before!

Changes in Music Notation of the Middle Ages

When the Middle Ages started, performers memorized all their music. If you were in the choir, you had to listen to other people sing the music and learn it from them. Definitely not an efficient way to learn music! Choir directors were looking for a better way to teach music!

Breakthrough!! Shortly after 1000 A.D. Guido de Arezzo, an Italian musician, got some ideas. He was tired of trying to teach new choir members how to sing all the songs they needed to know. It just took too long – like 10 years! He had to come up with a new system. He standardized  the way musicians wrote neumes and made them easy to read and understand. Then he began to write the neumes on sets of four horizontal lines – like a staff with just four lines. The position of the neume on the set of lines gave a pitch position – whether the sound should move higher or lower. The French musician, Pérotin, came up with a written way to indicate rhythm. Now the choir members could learn their music by reading it from paper instead of learning it just by listening. And as the music got more complex, it became even more important to have a way to learn the music faster.

Changes in Music Creation in the Middle Ages

Being able to write music on paper changed the way musicians “wrote” music. Before this, if a person came up with a new song he would sing it over and over to everyone he knew. Then they would sing it repeatedly to people they knew, hopefully without changing the song at all. But now a person could think of a new song, write it on paper, pass the paper around, and people could learn it exactly the way the composer wrote the song. Being able to write the music down also allowed musicians to write more complex music. Now composers had a way to claim ownership of their music. They could sing their names on the paper with their music.

Musical Instruments of the Middle Ages

Most of the instruments we are familiar with today did not exist in the Middle Ages. But some of the “ancestors” to our modern instruments were available. Musicians had several different pipes (wind instruments). The bagpipes were around during the Middle Ages. There were also many stringed instruments: the dulcimer, the psaltery, the hand-held harp, the lute, and the viol. Sometimes a group of instrumentalists played together to entertain at a banquet or to provide music for dancing. They did not use groups of instruments to accompany singers.

Important Composers of the Middle Ages

Hildegard von Bingen, a German woman born in 1098, was one of the earliest named composers. She was also a scientist and a diplomat. People today still perform some of her music. Here is a link to some of her music: https://www.youtube.com/watch?v=BhrCv0zK3SU

Pérotin was a French composer from the 1100’s. He experimented with chords, written notation for rhythm, and placing neumes on a set of four lines to show pitch.

Guillaume de Machaut wrote music with repeating pitch-sequences and duration-value sequences (melodic and rhythmic patterns). His music was much more complex than composers before him. This is what his music sounded like: https://www.youtube.com/watch?v=AKpexxzR4Ak

John Dunstable’s contribution to composition was the concept of chords, especially triads. He is known as the father of the triad.

Guillame Dufay took all these new ideas for musical compositions and put them all together. He wrote music that had an identifiable melody, harmonious chords, a logical chord progression that led to a satisfying ending, and an organized rhythm structure. His music would sound familiar to you. Here, in the music of Dufay, you can see how the music changed since the beginning of the musical era: https://www.youtube.com/watch?v=_EMbGN2jeno 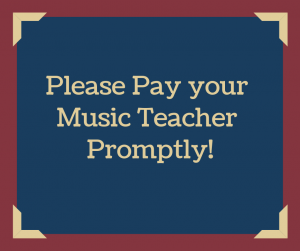 Pay your music teacher! Music lessons are not cheap. There, I said it. I know that from experience. But I have also learned that, for the most part, you get what you pay for. Not always true, I know, but most of the time it is. When you want quality, it costs you. And you should want quality for the music lessons you pay for. Granted, a beginner does not need a symphony-level instructor, but you should expect quality from your child’s music teacher. And that means you pay for it. Now, I’m not going to tell you where to come up with the money to pay for your child’s lessons, but I want to help you understand what determines the price your music teacher charges, and how he/she expects to be paid.

Your Music Teacher is a Professional

First of all, understand that a qualified music teacher has put in a lot of time and effort to become qualified. The teacher probably started practicing at a very young age and put in countless hours of practice before he/she even started college! Many music teachers studied music in college – they could have been performance majors, music education majors, or pedagogy majors. They put in the time and effort to be prepared to teach your child. Your music teacher is a professional, and he deserves to be paid as a professional.

Factors that Determine the Cost of Music Lessons

What determines the cost of music lessons? First, your location plays a role in the fees a teacher charges. Teachers in urban areas often charge more than teachers in more rural areas. Competition is greater in cities, living expenses are often greater in cities, studio space rental fees are usually higher in cities. Remember, your music teacher is a small business professional. This is her job. She must pay expenses, taxes, insurance, etc. Secondly, your teacher’s education and experience help determine his/her pay scale. The greater his experience, the more he is justified in charging for lessons. Usually a music teacher will study the market, get a feel for reasonable lessons charges, and try to set a comparable rate.

How or when does my child’s teacher expect me to pay? Good question. When I was in grade school, I remember walking to my piano teacher’s house after school, handing her a $5.00 bill, and sitting down to take my lesson. Things have changed since then! Some teachers still ask to be paid each week when a child comes to a lesson. Others request to be paid monthly (number of lessons in a month multiplied by the amount per lesson). Many other teachers operate on a term or semester basis. They will calculate how many lessons are in the given term, how much per lesson, then give you a total amount you owe for the term. They may expect you to pay for the entire term at the beginning of the term, or half at the beginning of the term and the other half at the midpoint of the term. Usually, paying your music teacher by check makes it easier for them to keep their records correct. Some will even take credit cards.

What about missed lessons or cancellations? Be sure to discuss this with your music teacher when you start lessons. Each teacher or studio has its own policy. Find out what it is and keep a copy of the studio policy. Some teachers will work with you to reschedule in case of sickness or emergencies. Some build an extra lesson into their studio term. Others will reschedule if the teacher misses a lesson, but not if the child skips the lesson. It is your responsibility to know the teacher’s policy. Don’t expect the music teacher to make exceptions just for you.