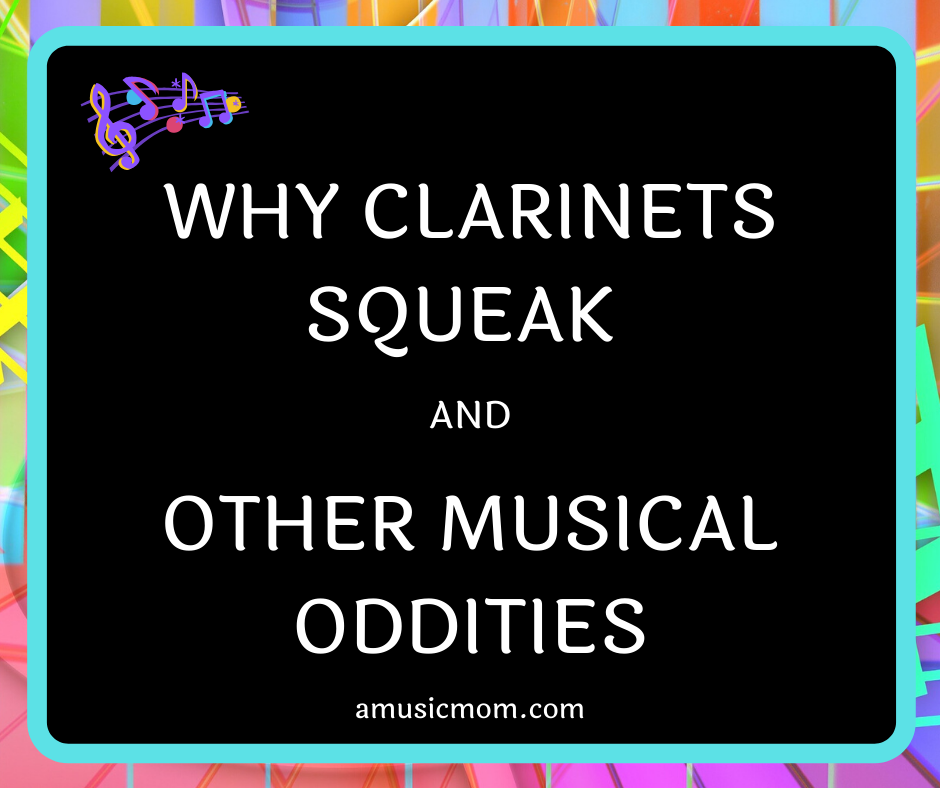 Why do clarinets squeak? Why do trumpets have spit valves? What’s with all these instrument oddities? Musical instruments are strange things. Hollow tubes with holes in them. Long metal pipes bent into strange shapes. Boxes with hammers and strings. Holes where you don’t expect holes to be. What’s with all this? Here are the answers to some of those strange questions you always wanted to ask but never did.

Why Do Clarinets Squeak?

Have you ever been in beginning band? Have you had to attend a beginning band concert? It seems like the clarinets are always squeaking! Why does that happen? What can they do to stop the squeaking?

Many factors affect whether a clarinet squeaks. And all these are things that the clarinet player must learn and practice. Beginners are still learning – give them a break when they squeak.

Here is a list of some of the more common reasons for clarinet squeaks:

Good news – the more a clarinet player practices, the less he will squeak. So practice away, my clarinet friends.

If you want more information about this, see here and here.

Why Does a Piano Have Three Pedals?

The pedal on the right is the damper pedal. When pressed, this pedal raises all the dampers (or long felt-covered bars) from the strings inside the piano. The strings will then continue to vibrate and sound until the pedal is released and the dampers are reapplied to the strings. If you have a grand piano or open the top of your upright piano, you can see this happen.

The left pedal on a piano is the soft pedal. Depending on the piano, this pedal works in one of two ways. Either the use of the pedal causes the hammers to strike fewer strings, or the hammers are moved closer to the strings so they cannot strike the strings as hard as usual.

Other pianos use a slightly different system to get a similar result. In this system, the soft pedal causes the entire set of hammers to move slightly closer to the strings. This means that the hammer cannot strike the strings with as much force, resulting in a softer sound.

And then there is the third pedal. Not every piano has a third pedal. This third pedal will do one of two things, but not both. On some pianos, the third pedal, called the sostenuto (sustaining) pedal, allows certain notes to sustain (or hold) without holding all the other notes at the same time. It is an interesting effect. However, unless you are playing advanced piano literature, you probably will not need to use this third pedal.

Some piano makers have taken that third pedal and given it a completely different purpose. Sometimes that third pedal performs as a “practice” pedal or a “silent” pedal. If you live in an apartment, perhaps the neighbors aren’t too excited to hear your late-night practicing. Or your early-morning arpeggios. What should you do? Put your piano in “silent” mode, by pressing that third pedal, and practice away.

What’s So French About a French Horn?

Once upon a time, a long time ago, a German Count went to France, picked up some hunting horns, and brought them back to Germany. These horns were a bit different than the ones they already had in Germany. Because of that, the people may have referred to these as the French horns to differentiate them from the German horns that were already in the country.

In the late 1600s instrument makers crafted horns in Britain, Germany, and France. Each country made the horns slightly differently, and each country contributed different features in the development of the modern horn. Evidently, the best horns of the time came from French makers, so musicians called them French horns. (Not to be confused with the British horns, the German horns, etc.)

Is there a final answer to the question about the term “French” horn? Of course not. And if you are in a rehearsal and the conductor asks the horn section to play a section of music, does he mean just the French horns or the entire brass section? Play it safe, and assume he is just referring to the French horn section.

Why Do Trumpets Have Spit Valves?

Spit valves are just gross, right? Trumpet players get to some rests, and the first thing they do is blow spit all over the floor. What’s with that? Ewwww! Think about how trumpet players produce sound. They blow – directly into their instrument. And with all the air that blows, you also get saliva. The air blows out through the horn, but not the saliva. It stays in the horn and collects.

Pretty soon, our poor trumpet player begins to sound like he is playing underwater. Because he is – sort of. And since he is not playing “Under the Sea,” we don’t want it to sound like that. The spit valve on a trumpet (and all other brass instruments) is located where the saliva collects in the horn. The brass player can open the spit valve, blow through his horn without making a sound, and empty all the water from his horn. Then he can continue to play with a good sound. Just be glad you don’t have to clean the floor after the band concert!

Why Are There Holes in the Tops of Violins?

The reason for the holes in the top of a violin (or viola, or cello, or bass) is simple – to let the sound out! Imagine if you are in your bedroom with the door shut and you want to tell your brother or sister to bring you a snack. You yell, but they never bring your snack. They will say they never heard you. But if you open your door and yell, they will hear you and bring you your snack (you hope). That’s the idea behind the holes on the violin. They are called f-holes – because they look like fancy letter f’s. Or some might call them sound holes. Vibration inside the body of the violin causes the sound, but that sound needs a way to get out. The f-holes let the sound out.

If the idea of f-holes fascinates you, you can read more about it here.

So, now you know the answers to some of life’s perplexing questions. You can impress your friends with your vast musical knowledge!

Leave your questions in the comments!

And check out some of our posts about specific instruments!