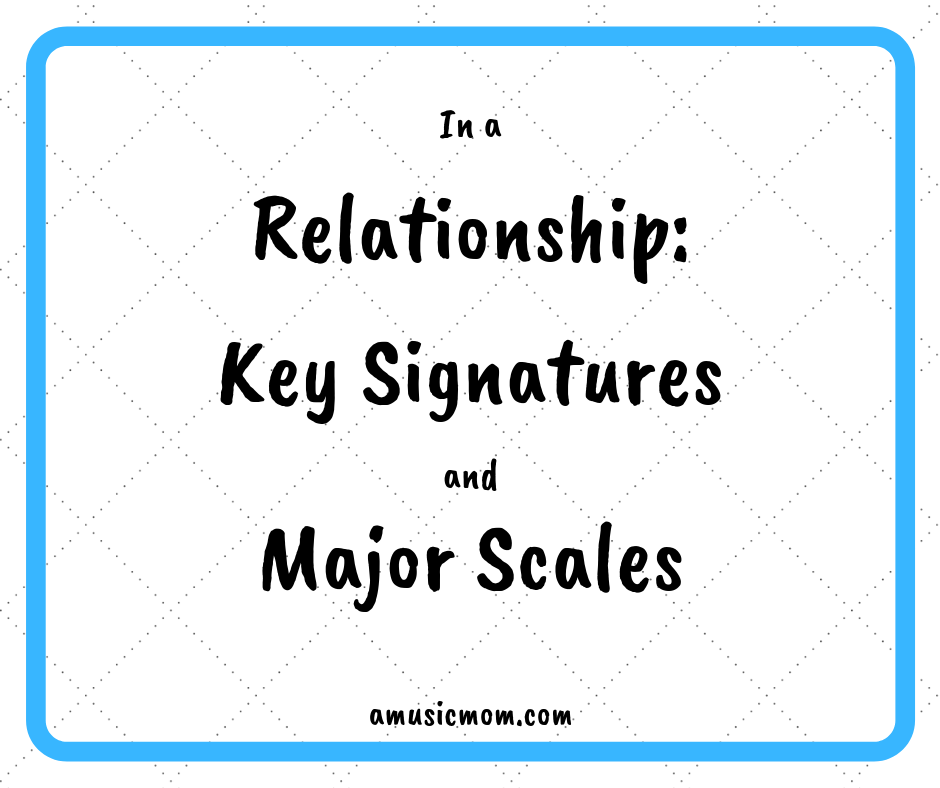 There is a definite relationship between key signatures and major scales. We will explore that today. You will learn how that relationship works!

First, a review of Key Signatures:

Key signatures tell us what scale a piece of music is based on.

Key signatures tell us what notes are always sharp or flat in a given piece of music.

Always read the sharps or flats in a key signature from left to right. And they will always be written in the same order.

Key signatures always have the sharps and flats listed in the same order. They always follow the same pattern.

Notice how one listing is the exact opposite of the other! Now, compare the listings here to the key signatures shown above. Notice how they read left-to-right.

You can find the name of the major scale from its key signature. Here are a couple ways to do that:

In the D Major key signature you can see there are two sharps. The last one (reading left to right) is the C#. If you go up a half step from C# you are on a D – and that is the name of the key.

Key Signature with flats – The second-to-last flat in the key signature names the key.

Look at the example on the left, the key signature with 2 flats. Look for the 2nd-to-last flat. It is a B flat, so our key name is B Flat Major.

In the other example, the one with four flats, again, look for the second-to-last flat. In this case it is an A flat. So the key name is A Flat Major.

Next, a review of Major Scales:

All major scales follow the same pattern of whole steps and half steps. Remember what it is?

It doesn’t matter what note you start on, the pattern must be the same to make a major scale.

Use accidentals (♯,♭) to adjust the notes to fit the pattern.

Remember, each note in a major scale must have a different letter name.

You cannot have F, then F♯ in the same scale. But you may have F – G♭. Even though on a keyboard F♯ and G♭ are played as the same note, you must have different letter names in a scale.

Now – The Relationship between Major Scales and Key Signatures

The accidentals you use to make a major scale fit the right pattern become the key signature for that scale. Here are some examples of what I mean:

Do you see now how the key signatures and scales are related? Any questions? Let me know in the comments! 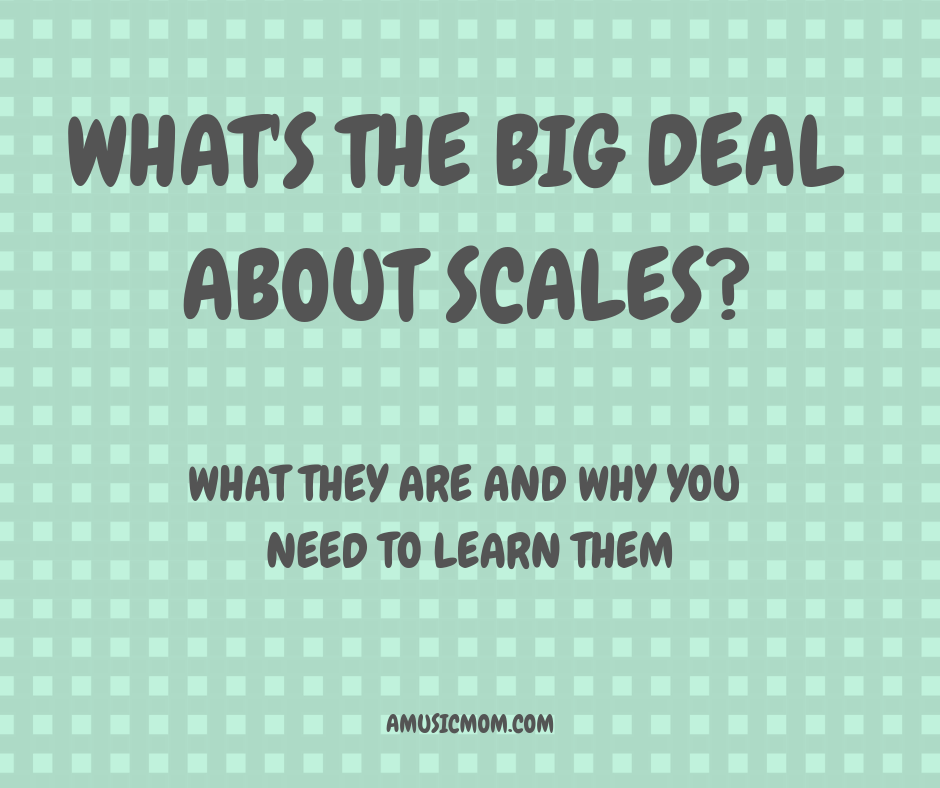 Major Scales – Know your Half Steps and Whole Steps

Definition of a Major Scale

A major scale is a successive series of 8 notes in ascending or descending order, that follows a specific pattern of whole steps and half steps. The first note and the last note of the basic form of a scale are always an octave apart. They have the same letter name.

Pattern of a Major Scale

A major scale always follows the same pattern of whole steps and half steps.

The scale that most easily demonstrates this pattern is the C Major scale. Following the pattern, a C major scale consists of these notes: C-D-E-F-G-A-B-C. Now, look at this on a keyboard. Look at how the whole steps and half steps are placed. Also, notice that the first note and the last note of the scale are the same, just an octave apart.

We can use this pattern to write a major scale starting on any note. Just remember, the half steps always come between the 3rd and 4th steps, and the 7th and 8th steps of the scale. Here are examples of some other scales. Look for the half steps and whole steps.

Importance of Scales in Music

Scales are important because they establish the tonality of a piece of music. The scale a piece is based on helps to set the mood of the music. It determines what chords will work best in a piece of music.

All music has structure. Scales provide that structure. They are the building blocks of music. Almost every step-by-step group of notes in your music comes from the scale the music is based on. The chords in the music are based on the scale. What’s the Point of Learning all these Scales?

Improve Your Understanding of the Music You Play

Learning to read, identify, and play scales will make you a better player, no matter what instrument you play! Your teacher does have a good reason to make you learn and practice scales. Practice them in one octave, two octaves, three octaves. Practice scales at different speeds. Use different rhythm patterns to practice scales. Learn your scales!!!  (Links to copies of scales?)

You will definitely improve your sight reading abilities if you can recognize major scales in your music. Any time you sight read a piece, always look at the key signature first! That key signature should automatically connect with a scale in your brain. And that gives you lots of clues to help you play the music better.

Obviously, all this takes time. But, take the time to thoroughly learn your scales! Be able to identify them, play them, and connect them with key signatures. I guarantee you will be a better musician as a result. 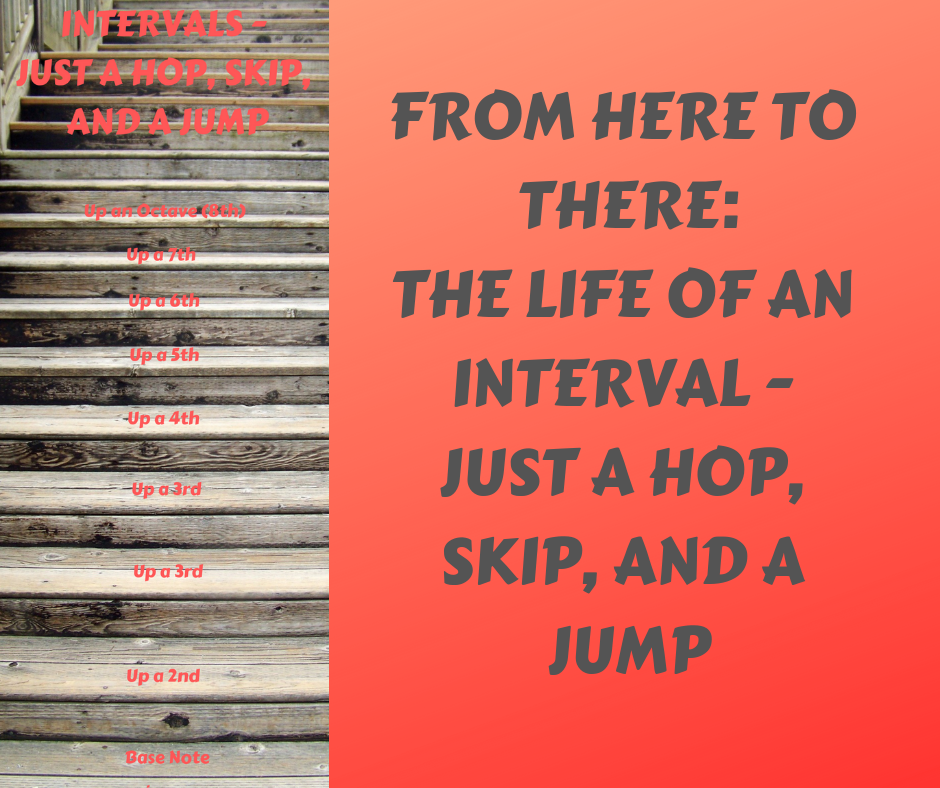 What is an interval?

An interval is a way of measuring the distance in pitch from one note to another. Intervals help us figure out if we must hop to a note, skip to a note, or jump to the next note. Kind of like playing on the stairs. Do you just step up to the next stair, skip a stair, or jump down the last 4 stairs.

Why should I learn intervals? What’s in it for me? Because we are talking about distance, intervals are named with numbers. The numbers represent how many notes (or steps) are included in the interval. Bottom note + top note + notes in between = interval. We write intervals with the notes one after the other or with the notes “stacked” on top of each other. Like part of a chord. Intervals can go up from a note, or down from a note.

Interval of a 2nd

2nds are notes that are one step apart. You might say they are next-door-neighbor notes. Or like going from one step on the stairs to the next one. When we write them on the lines and spaces of a staff one note will be on a line, and the other note will be on a space, either higher or lower than the first note. Here are examples of how 2nds look when they are written on a staff, and when they are played on a keyboard.

Interval of a 3rd

3rds are a little further apart than 2nds. 3rds skip over a note. Like standing on the bottom step, skipping over the next one, and going to the 3rd step. When we write 3rds on a staff either both notes are on lines, or both notes are on spaces. We go from line to the very next line, or from space to the very next space. On a keyboard, one note sits in between the top and bottom notes of a 3rd.

Interval of a 4th

Guess what! 4ths are just a bit further apart than 3rds. Like going up stairs and trying to skip over two steps.  Or jumping down the stairs over the last two steps. If one note of a 4th is on a line, the other note is on a space. If you look at a 4th on a keyboard you will see that two empty notes are between the bottom not and the top note.

Interval of a 5th

By the time we look at a 5th we are jumping from one note to the next. I do not recommend trying 5ths on the stairs! 5ths are intervals whose notes are either both line notes or both space notes. Either the notes go from line to line with an empty line in between or from space to space with an empty space in between. Take all the fingers of one hand and place them on consecutive notes on a keyboard. Then play the note under your thumb, and the note under your little finger, and you have played a 5th. Now, if you play the 3rd finger, you just played a 3rd from the bottom of the 5th, and a 3rd from the top of the 5th.  Very convenient to play – 5ths fit right under your fingers.

Interval of a 6th

On to a bigger jump! Definitely do NOT do this on your stairs!! 6ths are more line-space intervals. If one note is on a line, the other note must be on a space – with two empty lines and two empty spaces between the top and bottom notes. Remember how you put your hands on the keyboard for a 5th? Do the same thing, except make your last finger stretch out to one extra note. You just played a 6th. Interval of a 7th Octaves are intervals of an 8th. They get their own special name. Octaves are special, because both the top note and the bottom note have the same letter names. From A to A makes an octave. Or from F to F. Or from D# to D#. We write one note on a line and the other on a space. The two notes sound the same – one is just higher than the other one. So, learn your intervals! And make your musical life easier!